On 30 November, 2021, the CSTO Deputy Secretary General Valery Semerikov took part and spoke at the twenty third meeting of the Coordination Council of the Heads of Competent Authorities for Countering the Illicit Drug Trafficking of the CSTO member States. 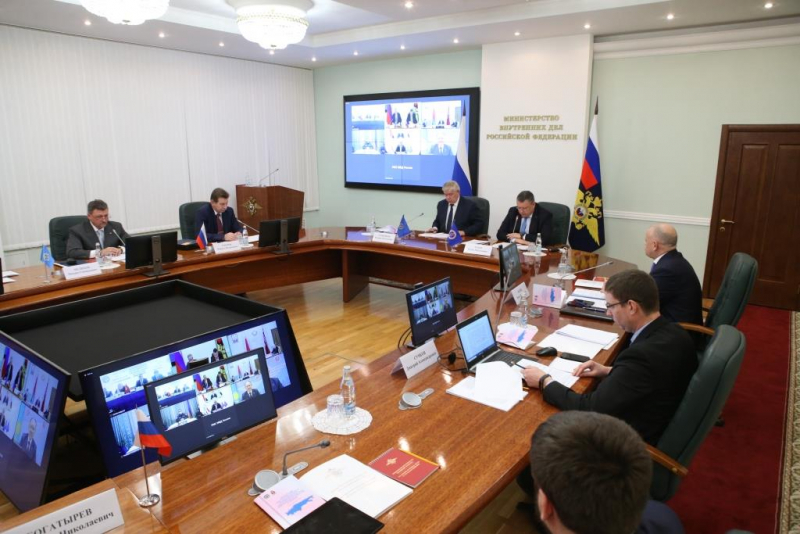 The meeting was chaired by the State Secretary - Deputy Minister of Internal Affairs of the Russian Federation Igor Zubov and was held via videoconferencing.

In his speech, the CSTO Deputy Secretary General welcomed the participants of the Coordination Meeting on behalf of the Secretariat of the Organization and also expressed serious concern about the noticeable deterioration of the military and political situation in the world recently: "There is a steady trend of increasing tension in the global and regional dimensions, including in the area of responsibility of our Organization, and the accumulated conflict potential may well provoke the use of force to resolve conflicts. Against the background of tensions that arose in the political, military, economic and social spheres, international terrorism has consolidated, one of the sources of financing of which are drugs and their illicit trafficking".

Addressing the audience, the CSTO Deputy Secretary General noted that the threat of Afghan drug trafficking had been and remained extremely acute: "There are serious and justified fears that the flow of drugs into the territory of our states will not change, and possibly will increase. This is evidenced by the results of the anti-narcotics operation "Channel-Granite Bastion" conducted in June of this year.

Throughout the whole period since 2013 in the format of CSTO, taking into account the situation and forecasts of its development, measures have been taken to ensure security in the region, in particular to reduce tension in the Tajik-Afghan border area. We have taken measures on combating terrorism and extremism, illegal migration, and drug trafficking from the territory of Afghanistan. Today, taking into account situation in Afghanistan related to disorganized withdrawal of NATO coalition forces from this country and seizure of power by Taliban, the level of all-round challenges and threats coming from the territory of this state has significantly increased.

Valery Semerikov also drew the participants' attention to the need to transition from one-time measures to a system of long-term measures in the field of anti-drug activities, including undermining the economic foundations of the drug business and prevention of non-medical drug use. He noted the relevance of holding meetings of the Coordinating Council with the participation of chief narcologists and experts in this field from CSTO member States, and also focused on the training of specialists in basic educational institutions - the All-Russian Scientific Research Institute of the Ministry of Internal Affairs of Russia and the Siberian Law Institute of the Ministry of Internal Affairs of Russia in Krasnoyarsk.

At the end of his speech Valery Semerikov emphasized that an important direction of the Coordinating Council's work had to be further improvement of cooperation with specialized structures of international and regional organizations: "I can frankly say that there is such a need and if we make adjustments and involve the potential of specialized structures of the UN, the OSCE, the CIS and the SCO in this operation and unite our efforts then I think that the results of this operation will be more effective and the operation itself will be in demand in international interests”.

Participants of the event supported the decision on the need to preserve and strengthen the current international legal regime in the field of drug control based on the three basic UN conventions and against the legalization of certain types of drugs.

In their speeches the meeting participants emphasized that the Anti-Drug Strategy of the CSTO member States for 2021-2025 created additional opportunities for taking a complex of measures to reduce the scale of illicit drug trafficking and non-medical consumption, the formation of an effective system of protection against the illegal importation, the expansion of mechanisms to counteract the illegal production of drugs, drug plants cultivation in the territory of the member States of the Organization, undermining the economic foundations of the drug business.

At the end of the Coordination meeting, participants summarized the results of law enforcement activities in the anti-drug sphere in 2021, confirmed the need to further combine efforts to combat illicit drug trafficking through the use of telecommunications and drug propaganda on the Internet, and also stressed the importance of continued ongoing monitoring of the drug situation, agreed on joint measures to respond the drug threats.


Back to the all news